To play confidently on the guitar, you need to have control of your fingers.

Whether you’re playing single note melody or strumming chords, every note is a target you need to be able to hit accurately. This might sound obvious, but many perpetual beginners don’t know what to do to improve their control and accuracy. Going for the same thing over and over works some of the time. But we often find that no matter how much we practice, it’s still a hit-or-miss proposition.

When you find yourself in this situation, it’s time to take a closer look at what you’re doing.

Have you ever practiced in front of a mirror, or taken video of yourself playing? How do your hands look? Are they relaxed and fluid, or do they look awkward?

Have you ever asked yourself whether your hands feel awkward on the guitar?

Some of you might say that they always feel awkward! But have you ever taken a closer look at why that is? What are you asking your hands to do that that doesn’t feel right?

Believe it or not, the first step is as simple as that. It’s easy to be so focused on where you’re trying to put your fingers that you don’t notice how they’re getting there (or not getting there). For example, take any simple chord transition in the open position. Most students focus on the shape rather than the individual fingers. What if you took a closer look at how the fingers actually move?

Most chord transitions break down into just a handful of possible finger moves:

1. All the fingers move in the same direction. (example, Em to A7). 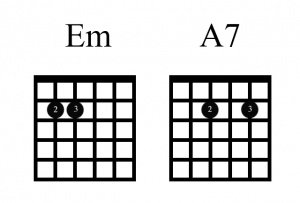 2. Some fingers move together in the same direction while others don’t. (example, G to Cadd9). 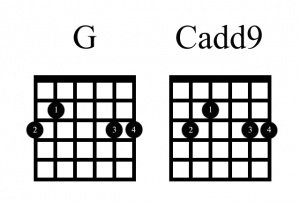 3. Fingers move in opposite directions. (example, Em to 4-finger G). 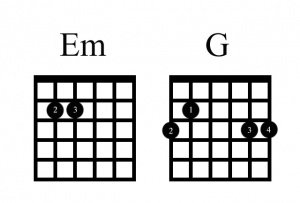 4. Fingers “flip” orientation. In other words, fingers on the lower strings move higher and vice versa. (example, C to D). 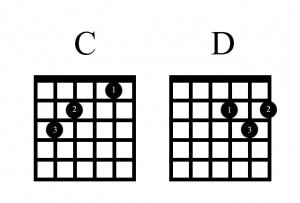 When you start to break the moves down this way, you’ll start to notice details:

When you pay closer attention like this, specific problems start to reveal themselves.

Usually the solutions also fall into one of several categories.

1. Most chord changes have a “lead finger”: one that leads the others more naturally when you move it first. For example, many people play a C chord by planting the index finger first and then extending the others. What happens if you plant the ring finger bass note first? You might find that it’s easier to reach the index down than to stretch the ring up.

2. Many chord changes have common tones, notes that are shared by both chords. If you use the same finger for that note, do you lift it off and put it back? What if you left it there and only moved the other fingers?

3. It can be really helpful to bring your hand, wrist, or forearm into the picture. For example, if the fingers “flip” then rotating the hand a little will help bring the fingers into place. If you’re been trying to hold the rest of the hand still and moving only the fingers, you might be creating tension and making the change more difficult.

One or more of these solutions can often make all the difference.

Of course, you should be working very slowly as you explore this. As always with technical practice, the goal is to hit the target notes accurately. Don’t move your fingers faster than you can control. Direct the motion of the fingers so you’re fully in control of how and where they will land.

It’s also very helpful to step away from chord practice and focus on working individual fingers. Technical exercises like this one are really helpful for building finger independence and control. If you find it challenging to keep up with the tempo in the video, work from the tab and take your time!