It’s an ongoing struggle for lots of people at the “long-term beginner” stage. I wrote a few weeks back about the pesky F chord, which is the first barre chord most students learn. The B minor usually comes next, because there are “cheater” version of both. But what about B major?

The “A-shape” B chord

The B chord is often overlooked. The open position B7 will often work just as well, especially in the common open keys of E and G. But some songs call for a simple major chord, and the 7th won’t always sound right. Even more importantly, learning the B form gives you a way to play sharp and flat chords (Bb, C#, etc) by simple moving the shape up or down the neck. 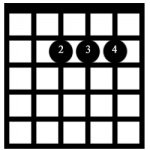 The trick now is the barre. Drop the wrist, extend your index finger, and lay it across the strings. You might find it’s most comfortable to let your fingertip extend past the top of the neck, or you may reach just as far as the A string. Find a spot that allows you to lean the index finger slightly to the side, to “pinch” the high E string with the edge of your finger just above the knuckle. It’s the same technique we used to form the F chord in “5 Tips To Stop Avoiding Barre Chords” a few weeks back.

What if the chord isn’t ringing?

If you find your finger won’t reach the strings to form the barre, experiment with where you put your fret hand thumb. Play with how much you allow the wrist to bend. Also make sure that the middle, ring, and pinky notes are sounding clearly. Keep the finger curled and your fingertips on the strings.

Some people are more comfortable using the ring finger to cover all three strings instead of the three-finger approach we just tried. This creates a second barre across the inside strings 2, 3, and 4. The best way to approach this is to allow the ring finger joint to bend back slightly, but don’t push too hard. Don’t worry about whether the high E string sounds or not…this will depend on the flexibility of your finger. If the high string is muted, the chord will still sound full and complete as long as the other notes are ringing.

Time for a finger workout

Even if you can get the chord to sound, though, you may need also to work to develop your finger independence. Try the following exercise slowly. Don’t try to hold all the fingers down at once or strum the entire chord! Instead, practice planting each one individually, building the shape as you go. Use the fingers you would to play the full shape, but only hold down one note at a time:

Remember, the trick is to work the fingers individually. Practice this exercise very slowly…play it through two of three times a day for a week and then try holding notes down together in different combinations:

– Hold 2 notes at a time (as you add notes, keep your finger on the previous note and let it ring over. Release the note as you add the next.

– Hold the three fingers on the 4th fret as a chord and let the index finger move back and forth between strings 1 and 5.

– Hold the entire chord (this will be the most challenging).

Give it time, these forms can take a while to master. Also keep in mind that even a little bit of daily practice is very powerful when you practice with intent and focus. Every bit of effort helps move you forward when you practice attentively.