I like to start new students out using a flatpick. It’s the simplest way to strike a string because the pick comes to a point, giving us one spot to aim for each time. For many people, that’s all they will ever need. Developing control and specific picking techniques comes with time, but the basic approach remains the same.

However, learning to pluck or “pick” with the fingers opens up all kinds of possibilities a flatpick won’t allow. There’s virtually nothing you can do with a flatpick that you can’t accomplish with your fingers. So for the player that wants to have more options, learning to fingerpick is a great way discover new sounds and textures.

The challenge is that there are as many ways to play fingerstyle as there are guitarists playing it. Watch ten accomplished players and you might easily see ten different things. In fact, some of the greatest and most influential players in music had idiosyncratic approaches no one would teach. Those oddities are part of the sound those players produced, and sometimes there’s a lot to be learned by looking at them. But for a beginner, it’s best to take a broad view and use the techniques that work best for the majority of players. As with every other aspect of guitar playing, it starts with the hand itself.

Hold your picking hand out in front of you with the arm held perpendicular to the floor and your thumb on top. Let the arm, wrist, and hand relax. You’ll probably find that the hand at rest looks something like this:

If your fingers are extended, see what happens if you “ask” them to relax. Extending the fingers does require engaging the muscles, so if they aren’t slightly curled you might not be completely relaxed.

Now bring your fingers to the strings, resting the index, middle, and ring fingers on the three treble strings and the thumb on the fifth string. Think of this as resting position. 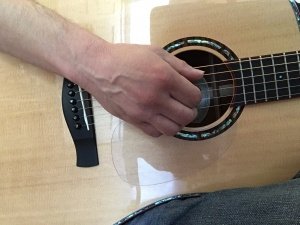 One thing you’ll notice in observing other players is that this position is a starting point and not an absolute. Everyone’s hands are proportioned a little differently, and that’s going to change the amount of curl in the fingers and the shape of the wrist. The main thing is to try not to bend the wrist too dramatically in any one direction. Maintain enough curl so that you can move the fingertips in towards the palm to pluck. The finger should pass through the string more than pull it away.

These three examples should be enough to give you a start. Remember that there are as many different approaches as there are players, so feel free to experiment. Start with a relaxed hand at rest as a “default” position, and then make adjustments as you experiment to see what feels most natural to you.

To illustrate how different two great players can be, watch this video of Chet Atkins and Jerry Reed. Of course, this is fingerstyle playing at its absolute best…but you’ll notice a big difference in the way these two virtuosos approach picking.

For more on this subject, check out my previous post from 2015: pick vs. fingers.