You probably know the old expression “three chords and the truth”.

Well, the truth is that while you could get by with three chords, your basic strummer’s core vocabulary should be nine. That’s incorporating just one barre chord, the simple F.

We know that chords are named for the letters of the music alphabet, A through G. Standard tuning on guitar favors some of these over others because of the open strings. The six strings of a guitar are tuned E A D G B E, low to high. So the chords that use these notes are the easiest to play, and form the basic vocabulary some people call “cowboy chords”. (Remember the singing cowboys from 50’s Western movies?)

Looking at the open strings alone, we already have an E minor chord if we strum the three treble strings (or pluck them along with the low E on the 6th string). The 4th, 3rd, and 2nd strings together form a G triad, and a C chord includes the open G and E. So we have a head start on the key of G without fretting any notes at all!

We also have three sets of strings that make it easy to create a power chord – a three-note form that contains a root, fifth, and octave – by adding one or two fingers. This sets us up for E, Em, A, Am, D, and Dm.

This gives us a pretty solid foundation already: five major chords (A, C, D, E, G) and three minors (Am, Dm, Em). This gives us the most common chords in three keys, with some variations. Note that I’m using standard numbers in the Nashville style, not Roman numerals like you might see in a theory textbook.

It’s easy to see why so many songwriters favor the key of G and just use a capo to transpose.

Adding a simple F chord gives us just as many chords in the key of C:

The F chord is often a stumbling block, but lots of people get by with this “cheat”: 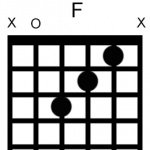 If this is all sounding familiar to you, you’re not alone. There are a lot of strummers out there that use just these eight chords, with a few additions and variations. One of the most common and useful is the dominant seventh or “seven” chord.

The term “seventh chord” can refer to several types of chords, but we’re going to start with “seven” or “dominant seventh” chords. You will find these all the time in traditional folk, country, blues, and throughout the Great American Songbook.

The “seven” often works well in place of a 5 chord in a major or minor key. Try these 1-5-1 sequences:

String them together and play the blues:

In traditional folk, country, and bluegrass, a seventh chord is often used for the 5 chord, or as a transition between the 1 and 4 chords:

In many standards and blues, we find sevenths used as a “secondary dominant” (or “V of V” in traditional theory terms.

With a little variation, we can play a simplified version of “Georgia On My Mind”:

It’s true that most of the examples above point us firmly in a traditional or “roots” direction. If you’re setting out to write a song in a particular style, knowing the common uses of these chords is very helpful. But it’s best to see everything in music as an open set of possibilities rather than rules to be followed. Add these chord forms to your vocabulary and see where your ears guide you. All innovation in music comes from someone making a choice to use existing elements in a different way. Don’t be afraid to explore, and see where it takes you.