Chords come in a wide variety of flavors or “qualities”. Each one has a distinctive feel or “vibe”, an emotional association that goes with the sound. A simple example would be the contrast between bright, happy major chords and darker, sadder minor chords.

When we learn chords on guitar, we usually start with the basic majors and minors. For a beginner or rudimentary player, there actually aren’t that many chords that make up this basic vocabulary. (For a fuller exploration of this idea, see my earlier post on the subject).

We can add a lot to your palette by adding in “color chords”. These are variations on the basic major and minor sounds that can make things more interesting and unique, and sometimes easier to play in the bargain!

One of the most common types of color chords is the add9 (pronounced “add nine”). You might be familiar with this one, it’s a common substitution for a simple C:

Compare this with the more familiar C and you’ll notice than the add9 is a little more atmospheric…there’s a little more interaction between the notes. This one works well in the keys of G and E minor, but be careful. A color chord CAN be a cool substitution, but it can also make something straightforward sound a little off. Use your ears and your artistic judgment.

This is another variation on the simple C, in which we remove one note and double another on the high E string: 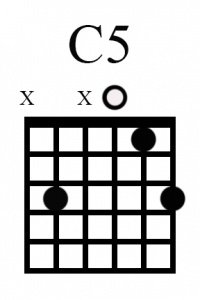 Play this one with the ring, index, and pinky, allowing the ring finger to mute the 4th string. It’s called a “C5” because it’s really only made up of two notes, C and G, which are the first and fifth tones of a C scale. So low to high, the notes are C-G-C-G. This one can be used any time as a substitution for the more familiar C, but notice how it brings a completely different flavor.

You’ve probably learned some “7” chords. Many of them are easy to play and are part of the basic beginner vocabulary. The most common are what we call “dominant seventh” chords, which are indicated by the number 7: A7, D7, E7. But there are other types, all formed the same way: take the scale that corresponds the the root note of the chord and add the seventh note. Here is an Am7 or “A minor seventh”: 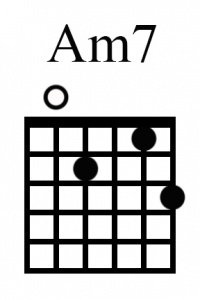 This one makes a cool substitute for the more familiar A minor. It can also be played with an open E string instead of the 3rd fret note shown in the diagram.

Suspended or “sus” chords are a common part of the basic vocabulary: listen to Tom Petty’s “Free Fallin” for a familiar example. Suspended chords are formed when we take the “third” of the chord – the third tone of the scale – and replace it with the second (sus2) or fourth (sus4). Here are two less common but easily playable examples: 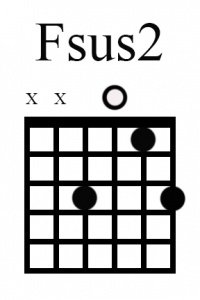 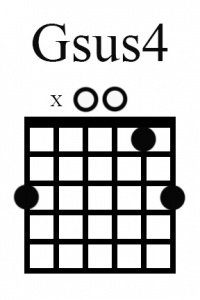 Tom Petty uses the suspended chords in “Free Fallin’” to create a melody, but these chords create atmosphere. Play the following chord progression:

Then substitute the following:

See how different it sounds? You might also notice that the two highest notes never change, which makes for a nice ringing sound throughout the progression. Here’s an example of what this might sound like with a strum pattern added. Note that this example has a capo at the second fret. So you will use the shapes we’ve introduced, but the chords sound a step higher: Bm7 Asus4 D5 Gsus2.

There are many more possibilities of course, this post is only meant to scratch the surface!