It’s been a week of Tom Petty tributes, and for good reason. He was everyman’s rockstar, as cool as anyone could ever want to be but not so cool you didn’t feel like you could sit down for a beer with him. He wrote infectious songs about girls and cars and chasing your dreams and the joy and pain of living. He went on making vital new music practically until the day he died. And he spent his entire musical career working with the same core of musical companions, a rock & roll band of brothers, in a world where practically every great partnership ends in bitterness and lawsuits.

As a songwriter, Petty recognized the power of simplicity. As a performer, he understood the power of playing with a band – musicians who know each other well that they think as one, each player naturally reacting to the others. As a frontman that started as a bass player, he could be the star and still remain always as much a part of the group as any “backing” player. But the Heartbreakers were no backing band. They were a musical machine as well-oiled and flexible as the Stones at their best. They had a sound as definable as their leader’s unmistakable voice. Each player brought an instrumental voice of their own that contributed to the whole, tempering skill with taste and substance over flash.

Though the songs themselves are solidly based in three-chord rock & roll, there were always unpredictable choices. Twists and turns to keep the listener engaged when you listened beyond the killer hooks. Dynamic, creative arrangements delivered tightly and precisely but with true rock & roll abandon. On top of that, you could SING practically every instrumental part. Heartbreakers lead guitarist Mike Campbell taught me more about taste, tone, melody, and restraint than possibly anyone else I listened to in my formative playing years, and I can remember practically every one of Stan Lynch’s driving, joyous drum fills.

Here’s a look at three great TP guitar intros, and what you can learn from them.

This was the first Tom Petty song I learned on guitar, and a major accomplishment at the time because of that opening F# minor barre chord! The chords themselves are simple, once you can manage that first barre: F#m, A, and E. But the opening guitar part it also a hook in itself, setting up the vibe and attitude of the song in just a few notes. Campbell picks up the same basic line with two small embellishing bends an octave higher for his short intro lead: 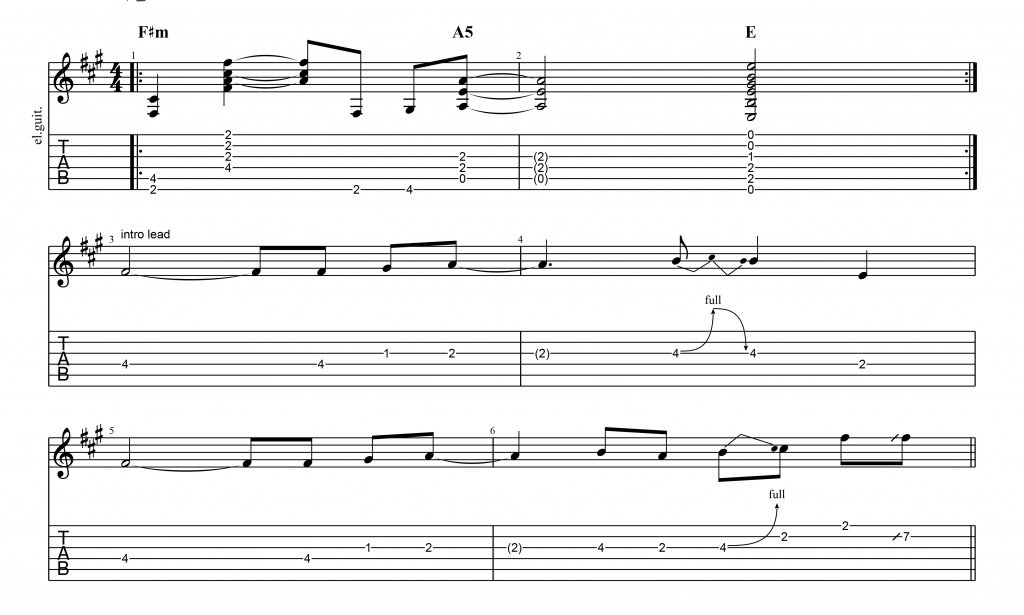 Notice how the riff and the lead mostly follow the root notes of each chord, adding just enough connecting notes to make a simple chord pattern into a melodic hook. Note Campbell’s very cool concluding lick, a subtle nod to Chuck Berry with its unison bend, arpeggiated double-stop, and concluding unison slide.

From note one, we hear echoes of Byrds founder Roger McGuinn’s jangly rhythm, as well as a hint of riffs to come (the opening of “Free Fallin’ also relies heavily on suspended chords).

The tab here is meant to be approximate, but watch this performance from 1983:

You’ll get a good sense of how to approach the intro from watching Tom play it. Here, he’s holding the upper notes of an open G5 chord while playing a moving bass part against the droning high notes. The basic harmony is G – D/F# – A – D, fingered like this:

Note that the high G note on the E string is generally not struck, but in the video you’ll see Petty keeping that finger on the string. This chord sequence is using the open G, high D and high G as “drone” notes that add color and interest but don’t actually impact the harmony. So while you won’t hear a Dsus4 on the studio recording, the high note might be brushed lightly. The overall effect is somewhere between a strum and a picked arpeggio, but it isn’t actually either one. The same principle applies to the second chord: the bass strings form an inverted D triad (D/F#) but the treble drone adds a suspended 4 to the chord. Theoretically speaking they ought to clash, but it works because the ear accepts the drone notes as a constant rather than a dissonance.

“Free Fallin” is a direct descendant of “The Waiting”, with its hooky strummed intro and use of suspended chords. The track itself is radically different from the sound of the earlier Heartbreakers records, though, coming as it does from Petty’s first solo album “Full Moon Fever”. Producer Jeff Lynne’s sonic signature is all over this album with the use of multiple layered guitars instead of the live-oriented rock & roll band approach of the Heartbreakers albums. The presence of Heartbreaker Mike Campbell provides some continuity, of course, along with Petty’s unmistakable voice and songwriting.

The chord progression is almost the same through the entire song. In fact, the only change comes from the addition of a bass note after the first verse. The open chords are played by two cross-capoed guitars, one with the at fret 1 (played in E) and one at fret 3 (played in D). Both guitars sound in the key of F.

In the second verse, the bass enters playing root notes with a small variation. Of course, since bass players don’t use a capo, the bass plays in F. So this first chord is F, but the second suspended chord is reharmonized by a Bb in the bass part. This makes that chord a Bb(add9), without the guitars having to change anything. Of course, there are more guitars playing at this point and the parts do change…but this is a good simplistic way to look at it. Lacking a bass player, you could use this variation:

All three of these songs share some of the qualities that make Tom Petty’s songs so accessible: simplicity, the melodic use of chords, and the addition of “color notes” to make familiar chords more interesting. Of course, Mike Campbell’s lead playing deserve a whole series of its own, but we’ll leave that door open for the future!