When was the last time you learned a new way to play a familiar chord?

It’s relatively easy to learn the primary “cowboy” chords. If we include the F chord, there are nine: A, Am, C, D, Dm, E, Em, F, and G. This plus a capo is enough to serve the most basic strummer, and there are songwriters that get by on less.

I meet people all the time that say they never get above the third fret. Legendary country songwriter Harlan Howard supposedly had a guitar with just three frets on it. This might just be legend, but classic country is a lot like the blues in that there are simple patterns that are used again and again. The old adage “three chords and the truth” really does apply when story and melody are king. If you add a fourth chord we could say the same about modern pop music, where simplicity and economy in songwriting are (usually) key.

But there are many styles of music, each with its own vocabulary and norms. And every genre has songs that are simple and others that are more complex. So to really be able to play what you want to play, it’s good to know more chords. Not just more types of chords, although that’s good too. But there are multiple ways to play even the most basic chords, and learning some of them will add a lot of variety to your playing. And you don’t even need to get out of the first three frets to find some of them.

The way we learn chords actually creates its own problem when it comes to learning new ones.

Since it’s relatively easy for a beginner to just memorize shapes, you can learn the basic vocabulary quickly. It doesn’t take long to get to the point where you can play a simple song well enough for someone to sing along. But because we don’t need to understand anything about how those chords are formed, many people never bother to learn it. When you do, the logic can still be tricky to apply. It’s much easier to follow on a keyboard, which is why all music students are required to at least get familiar with the piano. The simple, linear nature of the keyboard makes relationships easier to see. Not so much on guitar.

You might already know the basic theory. It takes three notes to make a major or minor chord. When we put those notes in sequence as close together as we can, we get a root position triad. This means the lowest of the three notes is the root, the note the chord is built on. If we start from the root and just climb the scale, we add the third and fifth notes we find to complete the chord. Easily enough, we refer to the other two notes as the 3rd and 5th of the chord.

This is the simplest way because there’s a consistent pattern from chord to chord, even if the combination of white and black keys changes: root note, skip a letter, skip another letter. But on the guitar, we just memorize box shapes. There’s rarely an explanation for why a D chord has four notes but an E minor has six – it’s just the way it is. We don’t even pay attention to the different in sound and are used to hearing it this way. But it’s helpful to understand what’s happening if you want to expand your vocabulary. It only takes three notes to form a chord, but guitar chords duplicate notes to create a fuller sound.

For example, a C major chord on piano looks like this: 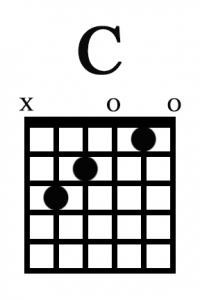 Leaving off the low E string, there are five strings being played. This produces a 5-note chord, C – E – G – C – E. It’s the same three letters are the piano chord, but the the C and E notes doubled.

At this point the light bulb might come on.

It only takes three notes to make a chord and we often double notes when we play basic chords. So we can find variations of a familiar chord by doubling different notes! 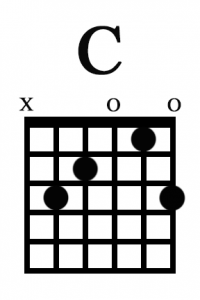 The C can be played either way, with or without the pinky. It’s still the same chord, but now the notes are C – E – G – C – G. We’ve just doubled the G instead of the E. It still sound like a C chord, but with a different note on top.

Now play each version of the C chord going to a D. Notice that the difference in the sound is melodic! Using the traditional C makes the “melody”, the high note, move up when going from C to D. Using our variation, the high note moves down. It’s a subtle difference but clearly a different sound.

Not every variation is this easy to find, but there are a lot of them.

Some are simple rearrangements of the notes of the triad. This doesn’t necessarily mean you’re playing an inversion, which means moving the lowest note of a triad to the top or vice versa. Inversions will still contain the three notes of the chord in ascending order. In other words, C – E – G inverts to E – G – C or G – C – E. The C chord we created by adding the pinky is what we would call a new voicing of the chord: C – E – G – C – G.

Sometimes adding a finger adds a different note and creates a new type of chord. This is a big topic and best left for its own lesson. For now, it’s enough to simply recognize that a chord is not a single thing but a collection of notes that can be rearranged in a variety of ways. Some of these fall more naturally on the guitar than others, and a little exploration is worthwhile. It’s helpful to get to know the note locations in the open position so you have an idea of where to look. Notice the note sequence on each string: this diagram omits the sharps and flats, just move one fret up from a letter to find the sharp and one fret down to find the flat. 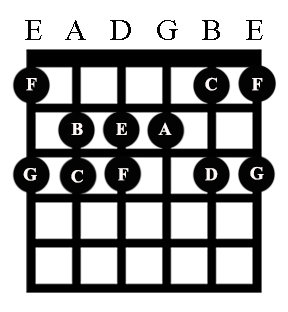 Rather than getting overwhelmed by the options, look at this lesson simply as an introduction to the concept. We’ll explore more specifics in subsequent posts.