I should take a moment to qualify what I mean by “understanding”. It’s certainly worthwhile to learn enough music theory to able to identify the notes of a key, or spell a chord. But knowing the math isn’t enough: real musical understanding can only come from listening.

“Harmony” is the result of notes blending together in a harmonious way to create chords.

Some chords are more harmonious than others, though. We call sounds that blend consonant, while sounds that don’t are dissonant. There are degrees of dissonance: some sounds clash more than others. But those clashing sounds actually create the sense of movement in music as much as anything having to do with rhythm.

Try this simple exercise. Hold down the notes of an open position G7 chord, but strike only the first and second strings. The sound is clearly dissonant, maybe even unpleasant. Now play an open position C chord, followed by a G7, then return to C. This sequence creates a complete musical statement with C as our starting point, and G7 as a tension chord that resolves back to C. Now go back to G7 and play only the first and second strings again. You will probably find that the notes sound a lot less dissonant! Outside of the context of the chord pattern, all we hear is the clash. Within the chord sequence, we hear movement: tension and release. 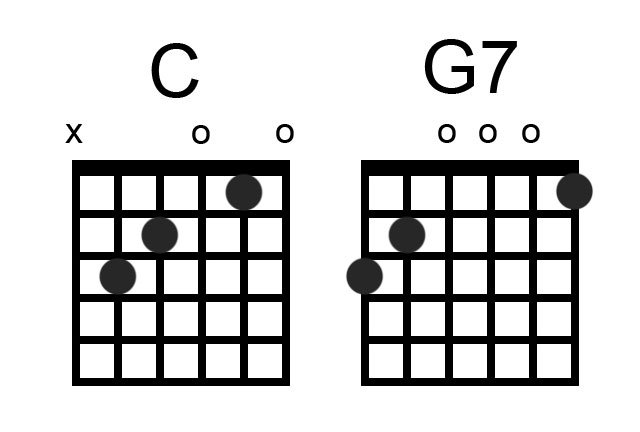 This concept is at the heart of our Western musical system. When one chord follows another, we get a sense of movement. Every new movement in the sequence sets up an expectation in your ear: not exactly predicting what will happen next, but suggesting possibilities for what might happen. It might be a simple two-chord sequence like C and G7, or it might unfold over eight or even sixteen bars.

No matter what, though, in almost every case the sequence eventually comes to a final resolution that completes the cycle.

Understanding harmony means your ear can follow these unfolding sequences, and hear the implied direction as one chord moves to another.

When writing or improvising, this allows you to create a melody part that works with the movement of the chords. For a great illustration of this, give a listen to Bill Withers’ “Lean On Me” and check out my post on the song here.

Sometimes chord changes are meant to play on your expectations. Try playing the following sequence:

Notice how the move to A minor chord plays off the expectation set up by the previous resolution from G to C. Instead, the resolution is delayed the second time by the unexpected minor chord before the return to C. If you play with sequence without the final C, the Am does provide some sense of completion but creates a much more unsettled feeling.

Even if the lines aren’t highlighted as a melody or bass part, these melodic “voices” reinforce and strengthen the sense of movement. Take a look at this example:

The top line gives you the chord part. The bottom line extracts two possible melodies from the chord sequence. Play the melody alone and then play the chords once more. Notice how the melodic connections between chords help to reinforce this sense of movement and “progression” from one chord to another.

In this more advanced example, the chords could be grouped in sets of two or three.

Each group “points” the ear to the chord that follows:

We start off in the key of C, with Dm7 and G7 pointing to Cmaj7. Shifting the chord to Cm7 sets up an F7 resolving to Bbmaj7, creating the same chord progression in Bb major. The half-step descent to A7 is an unexpected twist, as is the A# diminished that follows. But the diminished chord resolves neatly into Bm7, setting up a chain of 2-5-1 resolutions:

Notice how the first time through, the C7 doesn’t resolve to F as we’ve come to expect but to the Dm7. This is what we might call a “deceptive” resolution, but the second time through to C7 resolves to F to complete the pattern in F major.

If all that theory is making your eyes cross, just listen to the sense of movement as the progression unfolds.

Try to hear how some of the chord changes resolve exactly as you might expect, while others are more surprising. The surprising changes delay the sense of resolution and prolong the tension until the very end of the cycle.

If this concept is new to you, all you need to do at first is just start listening. The more you pay attention to these kinds of musical details, the easier they become to hear. Ultimately, hearing this sense of implied movement within a chord progression will make it easier to learn new songs, write interesting chord sequences, and improvise. Learning the notes and chords that belong to each key will also help complete the picture, but take in the information a little at a time. Remember that memorizing is relatively easy and quick, but internalizing into your musical ear is a longer process of assimilation. As with everything else in learning music, it’s a marathon, not a sprint.