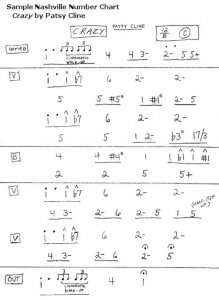 The Nashville Number System is a method of musical shorthand devised in the late 1950’s by Bill Matthews of the Jordanaires (most famous as the vocal quartet backing Elvis on his early recordings). It’s a great example of the practical use of music theory. With a little knowledge you can use the concepts behind the NNS to learn a song by ear, figure out a capo position to play in, or transpose a song to a new key.

The basic concept to understand is that a song is generally said to be “in a key”. That means that there are certain notes that are most likely to be used, and others that are likely to be omitted. The particular pattern of the notes creates a “key center”: a musical home base that determines how you hear the relationships between notes. Once this is established in your ear, you will perceive (consciously or unconsciously) that the patterns in the music will generally lead you “home” at the end of the song or sequence.

To illustrate this point, play the following 7 notes. Use the tab if you don’t know the note locations:

The difference between the two examples is one note, but it makes all the difference! Notice how the final C note in the second example creates a sense of completion that was missing from the first one. This sense of resolution – of a return to home, to stability – is the essence of how our musical system works, and the most important conceptual meaning of the term “key” or “key center”.

Understanding this puts the math in a whole new light. The numbers we use in the Nashville Number System come from the position of a note in the scale sequence: in the key of C, C is 1, D is 2, E is 3, and so on. That’s the math. When a musician reads the number chart, they determine the chords by counting the scale tones up from note 1, and playing the chord that corresponds to the resulting letter. (There’s more to know than that, but for our purposes it’s the main thing to understand).

The trick is to realize that because of this “gravitational” property of our musical system – the sense of “pull” we feel from note 7 of the scale when it isn’t allowed to resolve to note 8 – the numbers also stand for relationships between notes and chords. Accomplished musicians know what those relationships sound like simply by looking at the numbers. No matter where we start, we know what 4 will sound like as soon as we hear 1. This is because the numbers show a relative relationship that is both mathematical and sonic, and we can learn to recognize the sound of each one.

So what does this mean to the perpetual beginner? You already know that a capo allows you to change the key of a song by raising the pitch of all the chords equally. This preserves the sonic and mathematical relationships between them. When you start to learn the number system and the basic layout of the guitar neck, your capo suddenly becomes a much more useful and versatile creative tool – NOT a cheater!

This is the point where we need to start memorizing some things. To keep things simple for now, let’s start with three chords in 3 keys:

Read from left to right and play the 3 chords in each row, ending by repeating chord 1. Try this in all 3 keys and you’ll hear the common relationship.

If you memorize the 1, 4, and 5 chords in these 3 keys, you’ll have multiple ways of playing in other keys by using the capo in different places and starting on different chords. For example, you can play 1-4-5-1 in D without the capo by just playing D-G-A-D. Now capo the 2nd fret and play C-F-G-C. Then capo the 7thth fret and play G-C-D-G. The notes are different, but the overall effect and sound are very much the same!
Obviously the specifics will take time to learn, and we’ll explore this further in subsequent posts. For now, start by memorizing the 1, 4, and 5 in the keys of C, D, and G. Experiment with different combinations of numbers, plugging in the appropriate chords. For example, 1 4 1 5 in C would be C F C G, while the same pattern in G would be G C G D. Listen for the similarity in the relationship between the chords. After a while, this becomes easy, and you can learn by hearing the those relationships instead of doing the math. Ear training is a process that takes time, but the skills are something everyone can learn.