How many chords do you think you know?

How many chords are there, anyway?

The average basic strummer uses a vocabulary of about eleven chords, and has probably learned quite a few more that they don’t often use or might even avoid. (Barre chords, anyone?) 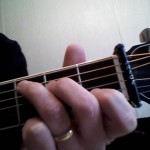 If we go through the familiar open position “cowboy chords”, we get five major chords: A, C, D, E, and G. Let’s go ahead and add F to that, since it’s so common that even people who struggle with the barre forms usually have some sort of workaround for it. So that’s six. The open position only gives us 3 primary minors, though, Am, Dm, and Em. That’s nine…add a workaround version of B and B minor and there’s eleven.

So how many keys can you play in comfortably with eleven open position chords? First of all, we’re going to be limited to the keys that use mostly open chords to begin with. Let’s say for argument’s sake that the most commonly used chords in a major key are the 1, 4, 5, and 6. The 2 and b7 show up often as well, while the 3 is more unusual and the diminished 7 so rare in pop music that we can leave it out for now. So plug our eleven chords into this formula and we get:

Clearly, there’s a lot missing! And it’s easy to see why so many strummers opt to stay in C, D, or G and just use the capo to get around to other keys.

The truth is, though, there’s still a lot that can be done with this set of chords. A song might use chords that are outside the major key but still sound good…for example, a change from A to C goes outside the key of A but is still a common progression, as is E to G in the key of E. This chord would be considered a b3, borrowed from the relative minor key. (The C chord belongs to the key of A minor, not A major. The Beatles were masters of this kind of “mode mixture” but it’s something we hear all the time in all kinds of music).

So this leads us to three big points for the perpetual beginner:

1. Clearly, barre chords are important and a hurdle everyone needs to get over. See last week’s blog and related video for more on this subject.

2. There are probably more possible combinations of the chords you already know than you might think.

3. There’s also the entire world of “color chords”: the various kinds of 7ths, add9 and suspended chords, and others that don’t really need or even have conventional names. These are all worth adding to your vocabulary piece by piece, as you encounter them in songs.

For example, one of my favorite songs to teach an absolute beginner is the 1971 hit “A Horse With No Name” by America. It uses basically just two chords: a familiar E minor, and then this one: 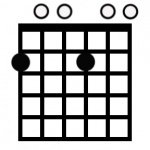 Now, the song was actually played in an alternate tuning, so the fingerings and “voicing” are slightly different on the recording. But the basic move is very similar: all the fingers on the same fret, changing to a different set of strings and then back. I don’t know for sure, but I doubt songwriter Dewey Bunnell decided to use a “D 6-9 chord” intentionally. He was probably just messing around with tuning and fingerings and stumbled on a cool sound. Obviously it worked out well!

You can explore in a similar way. Yes, a chord dictionary is a useful tool to have around. Yes, it’s good to know the names of the chords you use. But if you’re looking to grow your vocabulary, you should ideally be doing it two ways:

1. Learn new chords and their names as they appear in songs
2. Explore! Lift a finger, move it somewhere else, or add a finger.

When you get your fingers around a sound you like, strum and listen. Visualize the shape on the fretboard, and practice “seeing” it before you plant your fingers. Don’t worry about the theory or the names yet, that will come later. Concentrate on the formation and the finger movements first. If the chord is part of a song, practice getting there from the previous chord and then getting to the next one. Move the fingers slowly and deliberately at first, the speed will come if you focus on accuracy first.