A “riff” is a repeated pattern that often helps define a song instrumentally. There are literally thousands of songs that you recognize from the opening riff, and some that you might remember the riff and nothing else. “Smoke On The Water” by the ’70s English rock band Deep Purple being a prime example…most people might find the opening guitar riff much more familiar than the rest of the song. In that case, the riff IS the hook, and in many other cases the riff is at least a secondary hook. Think of the opening of “Sweet Home Alabama” as a prime example. You know the chorus hook, but that opening guitar part defines the song from the first note.

Today’s riff is a bluesy  pattern called “Twang Blues”, in honor of the Telecaster it was written on:

In this case, our riff is made up of a series of double-stops. A double-stop is a two-note chord, played either with the same finger or a combination of two. It’s not a complete chord, but will fit or imply the underlying harmony. In this case, we’re using a 12-bar blues progression as the chordal background:

This is also a very familiar chordal pattern and worthy of further exploration, but that’s a topic for another lesson.

We’re using three finger combinations to create these double-stops: a two-string bar with the index finger, the index and middle together, and the middle and ring together. Here’s some diagrams:

These two diagrams imply an E7 and A, respectively, and are used together often. Note how the A is played with an index finger bar across the 2nd and 3rd strings. Try bending your finger back at the knuckle to mute the high E, but you don’t need to cover more than those three strings. The bar connects nicely to the preceding E7 shape: we have time to set up the bar when we use the middle and ring fingers to play the E7. Release the bar and play the open second and third strings together to complete the riff, followed by the open E or A string (depending on where you are in the song).

We repeat the riff cycle for the first 8 bars, only changing the bass note to A for bars 5 and 6. At bar 9, we continue up the third string chromatically (frets 4-5-6), followed by this A7 form: 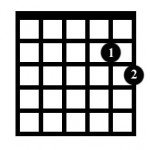 The turnaround completes with a simple lick you can play with one finger, working along the 2nd string and ending with an E form on strings 3 and 4. Hammer the first fret note for a nice bluesy touch: 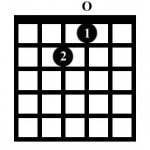 We then cycle through the form a second time, but this time we play a double-stop B chord on the 4th fret and walk chromatically (one fret at a time) down to the 2nd fret A before finishing the turnaround (in triplets this time).