One of the reasons so many guitarists play with a pick is that it makes strumming simple: swing the arm, strike the strings. When we think of playing with the fingers, we generally think of plucking rather than strumming, and it’s true that there are a lot more variables involved in strumming with the bare fingers. But those additional variables open up many more possibilities, and the basic technique isn’t any more difficult than using a pick. For many people, it’s actually more natural. Let’s take a look.

If you bring your right hand to the strings and simply let your hand relax, you’ll probably find that the fingers curl inward while the thumb extends and sits against the side of the index finger: 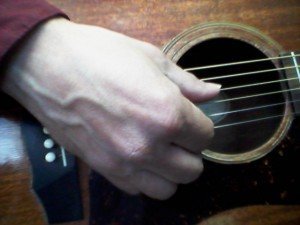 This orientation makes it easy for the thumb to move from string to string, while the fingers are set up to either pluck inward or extend outward. Try bringing your fingertips to your palm, then extending them out until the fingers are fully extended. This is our basic range of motion. If we add a slight arm swing to the finger extension, the back of the index finger nail will brush across the strings on the downstroke. The hard surface of the nail creates some attack, essentially simulating the sound of a pick.

Remember that you don’t need to push, just lightly swing the arm. You may find that you can simply let the fingers relax, you don’t necessarily need to extend the finger fully (though some players do). You may also find that your middle finger works better, or the paired index and middle fingers. There’s no absolute to this other than that we want to find the most natural and fluid movement. A slight rotation of the forearm also helps keep the stroke light – the idea is not to hit the strings hard but simply to brush them.

Now try this exercise: hold a G chord in your fretting hand, strike the 6th string bass note by pushing lightly down with the right hand thumb, and then swing the hand to brush the remaining strings. Maintain a steady rhythm: thumb, strum, thumb, strum. Try the same thing with C and D chords, changing the thumb bass note to the fifth and then fourth strings respectively. Keep it loose and don’t try to play loudly. Notice what part of your finger hits the strings on the down strum, and notice how striking the strings with different areas of the finger changes the tone. (You’ll notice that using the fingertip instead of the nail produces a softer sound).

Now try adding an upstroke. Just like strumming with a pick, it’s best to think of the upstroke as a return to your starting point rather than a completely different motion. In this case, that means reversing the arm swing/rotation and bringing the partially extended finger back in, brushing across the strings. Try a “bass down-up” pattern, striking the bass note with the thumb and then brushing back and forth with whichever finger or combination of fingers feels most natural. You’ll probably find that using the nail on the downstroke and the fingertip on the upstroke works best, but feel free to adapt as you explore. There are probably more variations on this technique than any other aspect of guitar playing, so don’t worry about doing it the “right” way – experiment and see what works. Some people like to use the thumb for everything, some use the thumb and one finger, and some use all the fingers. You can certainly train the hands to use different approaches, but the goal right now is to find a comfortable starting point.

The following (very casual) video, shot on the front porch of my Music Row office, is an example of a bass melody played with the thumb while the fingers strum the chords. If you’d like to learn it as an exercise, you can download the tab here. Notice the use of the thumb stroke, the index finger brush, and the occasional plucked chord.

We’ll pick up with more on this topic soon. Have fun!